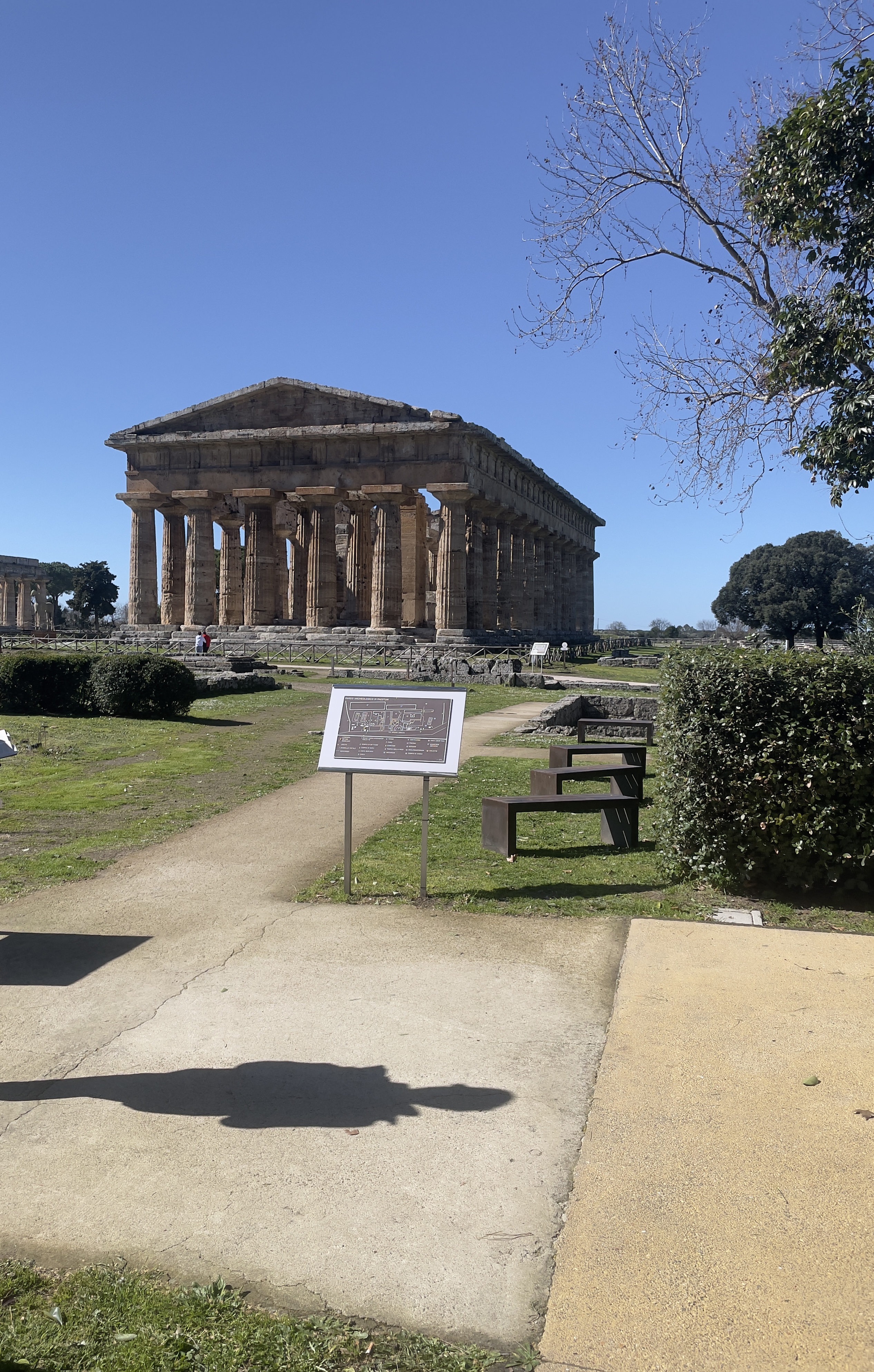 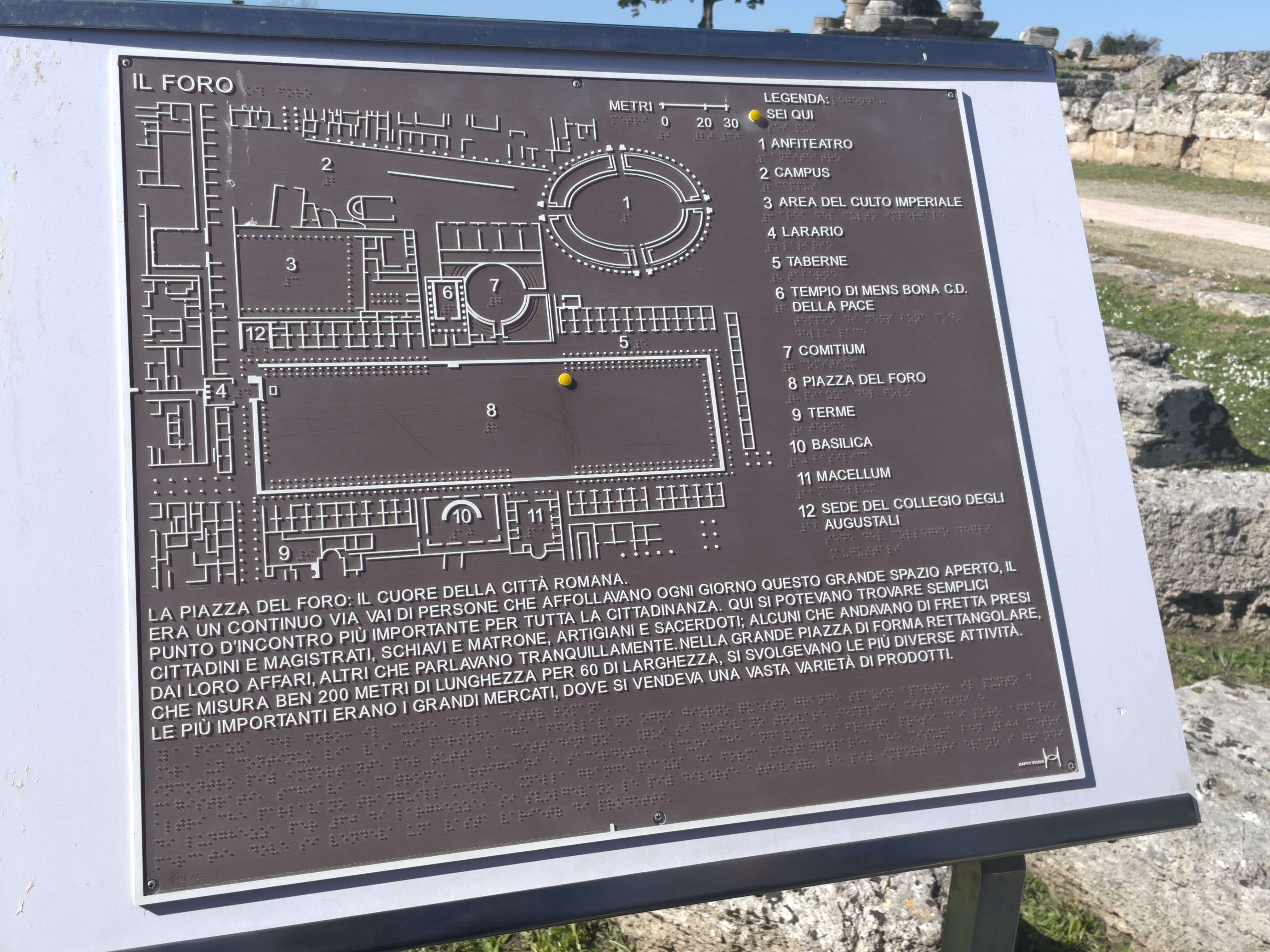 The project aim is to improve the visit offer of the archaeological Park of Paestum, in particular for those who are affected by disabilities, through the construction of suitable paths and structures; moreover it is finalized to the containment of the energetic requirement by means of adjustment works, restoration and retraining of some areas. By the end of the project, people affected by disabilities will be facilitated to visit the Park in different way, eg the adding of a radio that sends signals to the electronic sticks of the visually impaired to help them along the way. Thanks to this activities there has been an increase of this type of visitor. The project is part of a wider intervention plan, which is the management of the Park planned over the years. This consists in making the Park more accessible, more orderly, easier to maintain (more preservable), as well as more knowable, actually now a great knowledge of what is below the park is hidden. The planned redevelopment of 78,800 square meters is currently only actually involving an area of 43,925. After the approval of the project, which took place in November 2016, the start of the works, set for the beginning of the following year, was postponed to 3rd May 2019. The final and testing phase, scheduled for 1st January 2020, still remains to be completed.
The public cost is € 9,023,947.36, of which 6,767,961 financed by the European Union and 2,255,987 by the Rotation Fund. Payments monitored just amount to 37% of the total. In the three-year period 2019-2021, were allocated respectively 1,031,720.33 (11%), 1,043,776.3 (11%), to then reach, in 2021, the current sum of 3,391,202.35.

The monitored project is part of a broader program of reorganization, expansion and improvement of the usability of the site which concerns at least two other distinct projects, but which have the same objective of investment and which insist on the same theme (CUP: F42c16000560005; F42c16000060006), as can be seen clearly from OpenCoesione.gov.it site.
The project is a grassroots intervention that will generate further work and investment.

In economic terms: monitoring is difficult to carry out; in fact, when the project ended, the covid pandemic began; for this reason it wasn’t possible to measure greater attractiveness compared to external users (for example there were no school trips), only in the summer period large masses of people were registered (always within the limits of the capacities allowed by the Covid emergency) .
In terms of efficiency, the result is good; from an energy point of view, the current electrical system consumes less than the previous one; the sewage system avoids the accumulation and dispersion of various types of waste; the services are more usable (toilets, services for the public and employees), there is a more comprehensive and rational waste evacuation network (this too weighs in terms of costs).
In terms of knowledge, extraordinary results have been achieved: the excavations carried out have made it possible to better understand what was already known and to identify what was previously unknown (some isolated areas, ancient houses; the walls, which now are they manage to date and get to know better also from a structural point of view).
Then there is the conservative aspect, the restoration, that was carried out in the part of the walls and the built-up area, which will ensure a greater chance of lasting over time, and will facilitate visits and studies.
Finally, there is an increase in use: the areas studied recently, before the PON, were totally inaccessible; also for the members of the park itself, as they were abandoned in the woods, which in addition to compromising access, also compromised its conservation.
This has allowed the public to benefit more from the archaeological area.
Regarding the walkway and parking (new benches), the path is more rational as well as less tiring.
Finally, a space was created for outdoor socialization and educational activities.

Some critical issues emerged linked to the Covid 2019 pandemic which imposed the stopping of the works during the first lock-down; complications typical of a complex worksite where different processing and professions (restauration, excavation, implants realizzation, minor services and fruition devices, etc.) converge; administrative and organizational complications which engage the most of the human and professional internal resources, mostly if the providers and the executors, like in this case, are multiple.

A strong point of the project is the greater attention paid to the disabled and visually impaired.
A highly usable path has been created and this considerably facilitates the visit of the Park for the disabled; antennas have been introduced that emit signals that reach the electronic sticks, thanks to which the visually impaired can safely visit the Park.

The project does not take part on the structures with the aim of compromising their statics and function, but decreases the level of risk that was previously in the park, classified as high.
It must be taken account that by carrying out operations of modernization, restoration, excavation ... the aspect that the Park had previously changed.
For this reason, it is appropriate to take stock of the variation with respect to the alteration of the context, since by modifying the territory with the aim of improving it, one runs the risk of causing an excessively aggressive impact.

It is proposed: a greater attention followed by further interventions to areas that at the moment do not present optimal conditions to be visited by man; we also recommend a promotional initiative aimed at promoting the project in the territory.

Results and Impact of the monitoring

We did not reach out to public administration

Description of the case

The civic monitoring carried out by the team had an impact on those who manage the monitored project; in fact, if initially, despite the formal requests made by the team, the answers were slow to arrive (probably for internal organization problems), following the requests the officials made themselves available to illustrate us the results achieved by the project.

We interviewed Dr. Francesco Uliano Scelza, archaeologist of the Park.

1) What should have been the timing of the project?
2) Is it considered that the archaeological site of Paestum provides more tourists to the Cilento? Is it useful to finance interventions in the park?

1) The project should have lasted 24 months, which were reduced to 10 months following an improvement bid by the winner of the tender. 2) The forecast is that the number of tourists will increase. The numerical data will be evaluated in the future in relation to the end of the health emergency that, still now, affects negatively the accesses.
Some further and consequential plans to the PON project have already been defined but not yet implemented. At the moment it is estimated an investment of more than one million euros for the next 2 years. These forecasts are not further specified since the areas of intervention of the project haven’t been tasted and returned yet.